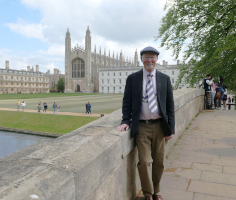 I'm working part-time as a freelance arts and heritage consultant, and much involved in work for several charities.

I won an exhibition to King's College, Cambridge to study English, but finished my degree (MA) in History of Art.

In 1980 I participated in the six-month Mural Paintings Conservation Course at ICCROM (International Centre for the Study of the Preservation and Restoration of Cultural Property) in Rome.

Fellow of the Society of Antiquaries of London (FSA), 1974

Member of the Art Workers Guild.

From 1968 to 1990 I worked for the Council for the Care of Churches and the Cathedrals Fabric Commission for England (now united as the Church Buildings Council) serving as its General Secretary from 1977 onwards.

From 1990 to 2002 I was Director of the Centre for Conservation Studies, Department of Archaeology, University of York.

From 2002 to 2007 I was Director of Conservation and Property Services at the National Trust for Scotland.

From 2007 to 2012 I was Professor of Cultural Heritage Management at the Brandenburg Technical University World Heritage Studies, in Cottbus, Germany.

From 2012 onwards I have continued to be active as an arts and heritage consultant, for clients who have included the Chapter of Lincoln Cathedral (2008–2018) and the Duke of Buccleuch.

My areas of expertise include:

I am active in a number of charities, as: